Disclaimer: Living Natural Today was given this product for the purpose of a review. I did not receive any monetary compensation to write this review. All opinions are 100% my own. I only recommend products I believe would be beneficial for you, my readers.

My husband and I have been busy painting and unpacking during the past month. I’m so thankful to say that we are finally getting settled into our new home!

When we bought the condo, hardly any of the walls were painted a color other than off-white. I like off-white, but it was too much to have in every room. It looked too sterile. I needed color! I also wanted the pretty white molding throughout the home to stand out more, so I went to a local home improvement store and picked out the colors I wanted to use. We were planning to paint the entire place, so it took a little time to coordinate all of the colors.

Eco Friendly Paint is Super Important for Those with MCS

As someone who has Multiple Chemical Sensitivity (MCS), I know that painting can be very difficult. When I was at my worst with severe symptoms, I wouldn’t have even considered new paint in the home, let alone be the one painting.

Fortunately, I have gotten healthier during the past year and my symptoms aren’t as severe. Plus, if I do have symptoms, I can recover more quickly. Even knowing that I’m doing better, I was still a little leery of new paint. Fortunately, we were able to do some of the painting before we fully moved in, so I didn’t have to sleep in the freshly painted room.

I am thankful for some of the online Facebook groups which recommend safe products they have used. I remembered seeing a post on the Canary Chat Facebook group. They mentioned that ECOS Paints was a “safe” non toxic paint brand. I decided to give ECOS Paint a try.

Before purchasing the paint, I scoured the ECOS Paints website. Just the fact that they had a page dedicated to those of us with MCS made me feel more comfortable with the brand.

As those of you with MCS know, half the time people don’t know what you’re talking about when you say you have Multiple Chemical Sensitivity, or they act like they sort of understand, thinking that it’s just an allergy. Only if they knew what it really was.

I also noticed on their website that they had an Air Purifying paint that has a “unique filtration capability that removes contaminants such as formaldehyde, acetone, glycol, and benzene from the air”. My husband couldn’t believe how excited I was when I read that!

It’s been a few weeks since we painted and I notice that it does help. We purchased a new piece of furniture that typically off-gases. I sat it outside for about a week and then wiped it down with vinegar before bringing it into our family room. Doing those things help with the odors of the chemicals, but I usually still get reactions from the formaldehyde for some time. It’s a couple of weeks later and I can actually be in the same room as the piece of furniture. I believe it’s due to the air pure paint.

After going through their website, I read through their reviews and decided to give them a call. The representatives at ECOS Paints were great to work with! They were there to answer any questions or concerns I had. They were also responsive afterward via email.

The ECOS Paints website says that their “products are free of pesticides, free of herbicides, free of fungicides, and entirely non-toxic”. They also say that their “paints are zero VOC and do not contain harmful solvents that off-gas into the air. Safer for you, your family and the environment.” After using it, I agree!

Putting ECOS Paints to the Test Against a Well Known Brand

Initially, I wanted to paint our entire home with ECOS Paints, but due to the cost, I wasn’t able to. However, I was able to spread it out so that there is some ECOS Paints in most rooms. In addition to ECOS Paints, I purchased Behr no VOC, low odor paint. It actually turned out to be a good test between the two brands.

Both paints had some odor on the day of painting, but not too strong. I wore a mask and kept the room ventilated. Fortunately, I didn’t get any major reactions while painting. While painting, I took some breaks and went outside for fresh air from time to time.

Tip: After painting, place either charcoal bags or plates with charcoal around the room to absorb fumes.

I also liked the fact that ECOS Paints ships all of your paint for a flat rate to a UPS store. This works great if you have a large order.

However, in our instance, we were trying to paint before fully moving in. I also had family in town to help, so I was on a tight deadline. I was told by ECOS Paints that they could accommodate my shipping timeline. Unfortunately, the paint shipment was delayed. They tried to remedy it, but it still arrived later than what was anticipated. In addition, 2 of the cans had spilled out some during the shipment. We didn’t lose a lot of paint, but it was a little messy.

Can the Same Paint Color Have 2 Variations?

I gave both ECOS Paints and the store where I bought the Behr paint the identical color codes for one of the base colors I was using. There was a slight color variation between the two paints. It isn’t noticeable when they are on two different walls, but it is noticeable if I try to touch up a wall using the different paint brand than what was originally used to paint.

The paint seemed to go on similarly to other typical brands. For part of our paint job, we hired professional painters. They had never used ECOS Paints before, but they seemed to like it. The one painter even commented that he preferred it to other brands in regards to how it rolled on.

ECOS Paints mentions on their website that their coverage is up to 1.5 times that of traditional paints because it isn’t watered down with cheap fillers. I did notice that the paint seemed to be a little thicker than typical brands.

Overall, I would highly recommend ECOS Paints, especially for those of us with MCS! I am thankful that there are companies like this that offer healthier, non-toxic alternatives! 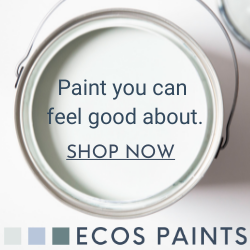 Read Next: Why You Should Pay Greater Attention to the Everyday Household Products You Buy

It was after overcoming personal health challenges resulting from toxins, stress and an unhealthy diet that my career changed from positions in corporate America to that of a fierce advocate for health-and-wellness and living naturally. I am currently the owner of Living Natural Today and a previous radio show host on VoiceAmerica's Health & Wellness Channel. I share resources about creating a healthier, more natural home and lifestyle. Click here to download my free healthy home guide.

Visit Our Other Site

This website uses cookies to improve your experience while you navigate through the website. Out of these, the cookies that are categorized as necessary are stored on your browser as they are essential for the working of basic functionalities of the website. We also use third-party cookies that help us analyze and understand how you use this website. These cookies will be stored in your browser only with your consent. You also have the option to opt-out of these cookies. But opting out of some of these cookies may affect your browsing experience.
Necessary Always Enabled
Necessary cookies are absolutely essential for the website to function properly. This category only includes cookies that ensures basic functionalities and security features of the website. These cookies do not store any personal information.
Non-necessary
Any cookies that may not be particularly necessary for the website to function and is used specifically to collect user personal data via analytics, ads, other embedded contents are termed as non-necessary cookies. It is mandatory to procure user consent prior to running these cookies on your website.
SAVE & ACCEPT